A Quaker testimony is a belief that stems from our fundamental understanding of religious truth. It is a corporately held belief about how we should individually act. In practicing them, we witness to our understanding of the very nature of God’s spirit of love and truth.

Our testimonies arise from our way of worship. Our way of worship evokes from deep within us at once an affirmation and a celebration, an affirmation of the reality of that Light which illumines the spiritual longing of humanity, and a celebration of the continual resurrection within us of the springs of hope and love; a sense that each of us is, if we will, a channel for a power that is both within and beyond us.

We list below quotes from various Quakers sources on each of the traditional testimonies. A longer list of quotes is available on the website of Philadelphia Yearly Meeting.

It may surprise some of us to hear that the first generation of Friends did not have a testimony for simplicity. They came upon a faith which cut to the root of the way they saw life, radically reorienting it. They saw that all they did must flow directly from what they experienced as true, and that if it did not, both the knowing and the doing became false. In order to keep the knowledge clear and the doing true, they stripped away anything which seemed to get in the way. They called those things superfluities, and it is this radical process of stripping for clear-seeing which we now term simplicity.

The foundations of Quaker pacifism are religious. We fully recognize the value of the intuitive recognition of the evil of coercive violence in the individual and national life. The sense of the contrast between the way of war and the way of love shown us in the life of Jesus Christ has compelling force. It is also enlightening to think of pacifism as a corollary of the fundamental Quaker postulate of the Divine Spark in every human being. This fundamental Quaker postulate lays on us the obligation to consider and cherish every human being. It follows, for those who accept the postulate, that they cannot do to human beings the things that war involves. It may follow that they become aware that other sorts of human relations are also evil, such as slavery, economic injustice, inferior status for women, and the results of the traffic in narcotics….

Quaker pacifism is an obligation, not a promise. We are not guaranteed that it will be safe. We are sure that it is right. We desire to make our individual decisions in harmony with it, and to help our fellows to do so.

Since their founding, Quakers have pursued peace and justice as core aspects of their belief. While Quakers have no universal creed, “Friends’ efforts to follow that Spirit which they encounter inwardly during worship as they conduct their outward lives has resulted in certain recognizable “themes” that continue to re-appear, in different ways, again and again among generations of Friends” (Quaker Information Center). Friends call these themes “Testimonies.” The Testimony on peace has led many Quakers to resist war, advocate peaceful means of reso 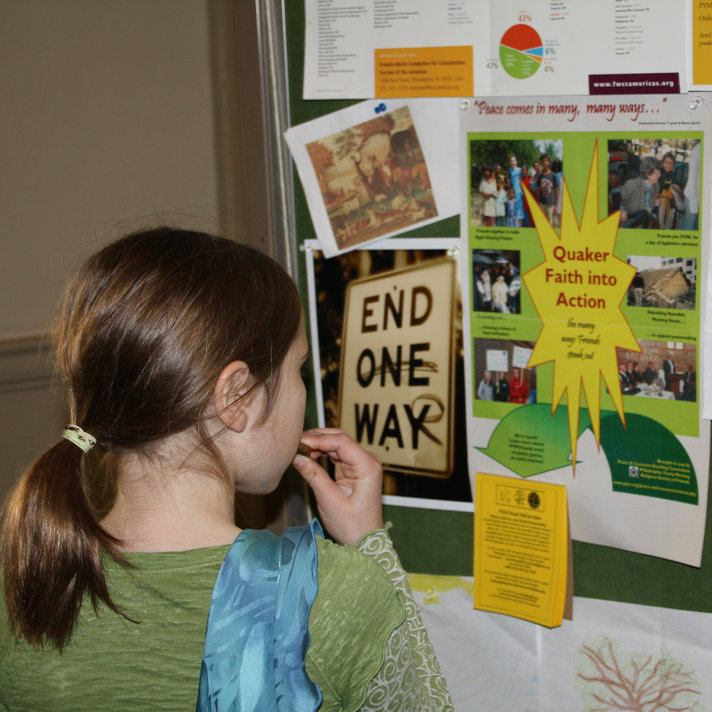 Germantown Friends Meeting pursues the Peace Testimony in many ways: through our Peace and Social Concerns Committee, through the work of other committees, and through the leadings of individual Friends. We encourage you to peruse the weekly announcements for information about some of these activities.

Philadelphia Yearly Meeting’s statement of Faith and Practice lists several queries for Meetings and individuals. Among them are queries on Equality, Social Responsibility and Witness, and Peace.

Quakers in the United States pursue the Peace Testimony through several several national and international organizations, including:

Friends Committee on National Legislation (FCNL)
FCNL staff and volunteers work with a nationwide network of tens of thousands of people from many different races, religions, and cultures to advocate social and economic justice, peace, and good government. FCNL is nonpartisan.

We have to be reminded that spirituality is not a separate compartment of life but life itself and what is ordinary is the major part of our lives…. Ordinariness can be radical: it gets to the root of knowing God in everyday life. 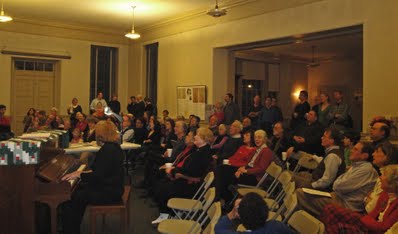 We know ourselves as individuals but only because we live in community. Love, trust, fellowship, selflessness are all mediated to us through our interdependence. Just as we could not live physically without each other, we cannot live spiritually in isolation. We are individually free but also communally bound. We cannot act without affecting others and others cannot act without affecting us. We know ourselves as we are reflected in the faces, action and attitudes of each other.

Friends recognize that much of the misunderstanding, fear, and hatred in the world stems from the common tendency to see national, religious, and racial groups as blocks, forgetting the varied and precious individuals who compose them. Differences between individuals, and between groups, are to be prized as part of the variety of divine creation. Every person should be free to cultivate his individual characteristics and his sense of belonging to a racial or cultural group as long as by so doing he does no violence to any one in the human family. Only when differences are the basis for feelings of superiority do they become barriers of hate and fear.